From the Front to the West Coast 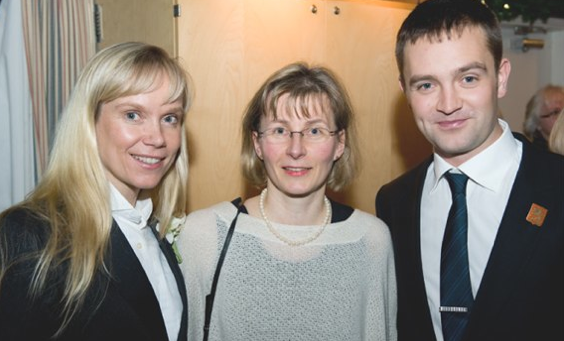 The Filmmakers (From left to right)

Satu Bell has 20 years experience in photography and post production. Satu attended the Photography Media and Darkroom Technician credits program
at the British Columbia Institute of Technology, and graduated from Langara College with honours, and a Diploma in Professional Photography. She has been working for 10 years as a still photographer for several Canadian and American feature films and TV series, and she is a member of International Photographers Guild. With the desire to direct her own film, she returned to Langara College to study the director’s role in film making. Satu has an innate ability at finding the true essence of her subjects, and capturing it on film. This talent is obvious and abundant in her directorial debut, From the Front
to the West Coast.

Leena holds an MA from Oulu University, Finland. She has been immersed in the field of language and communications as a language teacher, writer and translator. She is currently the Manager of the Scandinavian Community Centre in Burnaby, British Columbia, where she is also the librarian for the Vancouver Finlandia Club. The story of Leena’s great-uncle, the first officer to die in the Winter War, has served as an inspiration for the project.

Ilkka has worked for the Finnish Broadcasting Company, David Suzuki Foundation and CBC Radio-Canada, Vancouver, among others. He has experience as a Camera Technician, Editor and Production Assistant. He is currently working full time in a visual effects studio in Vancouver. Ilkka is passionate about Finnish culture. His interests include videography and the visual arts, all technical aspects of video and audio production, documentaries, all year round sports, community and sustainable living.

In April 2013, at the 40th Anniversary Celebration of the Finnish War Veterans in British Columbia,  Leena Kelly, Ilkka Uitto and Satu Bell receive the Silver Achievement Pin for their work to preserve the stories of the war veterans.